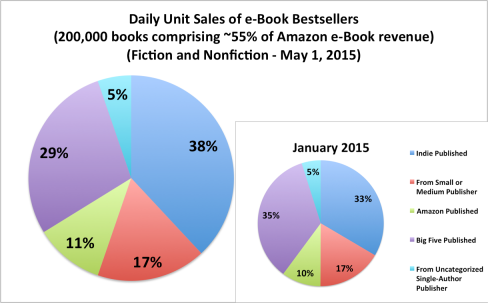 Welcome to the May 2015 Author Earnings Report. This is our sixth quarterly look at Amazon’s ebook sales, with data taken on over 200,000 bestselling ebooks. With each report over the past year and a half, we have come to see great consistency in our results, but there is always something new that surprises us.

Often, it’s something we weren’t expecting, like the massive shadow industry of ISBN-less ebooks being sold, or the effect Kindle Unlimited has on title visibility. This time, we went into our report curious about one thing in particular. But we were still not prepared for what we found.

If you’ve been shopping for ebooks on Amazon lately, you may have seen this new addition to many ebook product pages [, “This price was set by the publisher.”]

This announcement can be found on ebooks from several of the largest publishers, and it appears to serve as both an apology from Amazon and also a shifting of the blame for high ebook prices.

Amazon has stated in the past that they believe ebooks should not cost more than $9.99. Self-published authors are no doubt familiar with this price constraint, as their royalties are cut in half if they price higher than this amount. But after a contentious and drawn-out negotiation with Hachette Book Group last year, Amazon relinquished the ability to discount ebooks with several publishers. Prices with these publishers are now set firmly by them.

Soon after these agreements went into place, industry observers noted an upward move in average ebook prices. Freed from Amazon’s discounting, and with complete control over pricing, the publishers made a decision to push the price of many of their books above $9.99.

[…]We start with a simple counting of the number of titles on Amazon’s ebook bestseller lists. No math involved, just a detailed look at whose works are showing up as top-selling titles. For comparison, we included the same graph from our January 2015 report.

Over the same period, daily unit sales from the Big 5 have fallen 17%. This is a measure of the average rank of each ebook. Just as publishers study the New York Times bestseller lists to gauge the strength of their competition, we are looking at the same thing. But with a sample size of 200,000, rather than 20.

Next up, we factor in the price of those ebooks to see how much money is being spent. Here, we see that daily consumer spending on books by Big Five publishers took less of a hit, with market share of daily revenue down 7.8%. Remember that prices on these titles have gone up. Publishers are trading lower volume sales for more dollars per title. But this might not be as clear a trade-off as it seems, as we’ll explain later.

Most importantly for authors, we can see here a huge loss in daily earnings from Big 5 publishers of 20%. Their higher prices aren’t just hurting readers; they haven’t been good for their authors either. And authors seem to understand this, as many implored Amazon to continue discounting their works during negotiations with publishers last year. Now it is impossible for Amazon to discount these books, and publishers and their authors are losing revenue as a result.

Summary
Publishers fought hard to take back control of ebook pricing from Amazon. This was a stated intent by Hachette to its investors in 2014, and it was touted as the end result of their lengthy negotiations. What has that control brought?

By our data, which matches industry reports, this control has brought higher prices to consumers, lower sales for publishers, and less earnings for their authors. It has also brought greater market share for self-published authors, which is why many were pulling for publishers to get their way during negotiations with Amazon.

If it seems unlikely that publishers would have fought so hard for such disastrous results, it might help to be reminded that it isn’t the first time. In the lawsuit against publishers for conspiring to raise ebook prices in 2009, it was shown that the agreement they fought to win with Apple resulted in a reduction of profits per ebook sold (pg 53). Lawyers were also successful in showing at trial that a move to agency pricing resulted in a sudden and drastic shift upward in ebook prices, harming consumers, but also harming publishers (pg 94).

One does not need to theorize on why publishers would make these decisions. One CEO of a Big 5 publisher wrote in a note to herself that higher prices would slow ebook adoption and casual purchasers, protecting retailers (pg 47). So speculation is not required. This was the same conclusion reached by the judge in the collusion case, whose reading of Big 5 CEO emails showed a willingness to erode Amazon’s market share at any cost, even to themselves. The court decision in United States vs. Apple et. al. is not only gripping reading, it provides our clearest window into the intentions of major publishers, as it includes their private thoughts and emails.

Studying the market and all available data is critical for writers today. It is equally critical to understand the decisions being made by retailers such as Amazon and Apple, and publishers such as the Big 5. Without this understanding, authors may place their trust in partnerships that do not have their best interests in mind. Not all publishers are alike, of course. Some have not yet returned to agency pricing.

This may be worth considering when entertaining offers from various publishers. It may be useful to know that some price their ebooks much higher than others, which hinders sales. It might also be a good time for agents to begin including price ceilings in their negotiations with publishers. Their revenue goes down as author earnings go down. Literary agents are in a position to protect consumers, assist authors, and prevent publishers from driving up prices any further. Their careers are in the balance as well.

One final point that bears mentioning: protecting the paper book trade will not help publishers. We know from their own accounting that ebooks are far more profitable. Any report showing a decline in ebooks and an increase in print means a net loss for the Big 5 and their authors. Every dollar of consumer ebook spending that is replaced with a dollar of consumer paperback or hardcover spending means:

Reduced publisher profits (only 20 cents of profit on each dollar versus 52.5 cents on ebooks). Reduced author earnings (only 8-15 cents of each dollar goes to the author versus 17.5 cents on ebooks). Fewer of an author’s books get sold and read. Less discoverability (in the last quarter, the number of titles on bestseller lists plummeted 26%). Fewer new fans eagerly awaiting the author’s next book. Authors need to understand that ebook dollars and even the celebrated hardcover dollars aren’t equivalent. In addition to the lower royalty share authors get, a big chunk of those dollars are lost on printing, shipping, and returns.

Through all of this, we can see that control over pricing is enormously powerful. The largest retailers and the largest publishers are willing to do great harm to one another in a fight for this power. For authors who want control over their pricing, so they can avoid becoming casualties in wars between retailers and publishers, the choice of publication method is clear. And it’s becoming more clear every quarter, as self-published authors continue to win market share, and continue to take control of their careers.

Read the full article at Author Earnings, where it was originally published. No changes were made other than highlighting particular parts via indicated brackets. Creative Commons.